Indians were the largest group of foreign graduate students to benefit from optional training program (OPT) between 2004 and 2016, according to Pew report.

Indians comprised the largest group of graduate students in the United States who got authorization to remain and work in the country between 2004 and 2016, thanks to the Optional Practical Training (OPT) program, according to a Pew Research Center report.

Among the 1.5 million graduate students who were able to work in the United States after graduation, Chinese students were the second largest group, followed by South Koreans.

“The OPT program has grown to become the primary way the U.S. has retained foreign students graduating with science, technology, engineering and mathematics (STEM) degrees from its colleges and universities,” Pew associate director Neil Ruiz said.

“Foreign students obtaining authorization to remain and work in the U.S. after graduation come from all corners of the globe, and major metro areas in the U.S. tend to attract them in large numbers,” he added.

As many as 441,400 Indians, that is 30 per cent of the total, were able to remain and work in the United States, the Pew Research Center found after analyzing U.S. Immigration and Customs Enforcement data, which it obtained through a Freedom and Information Act request. As many as 3,13,500 (21 per cent) Chinese students and 90,800 (6 per cent) South Koreans remained to work in the United States. 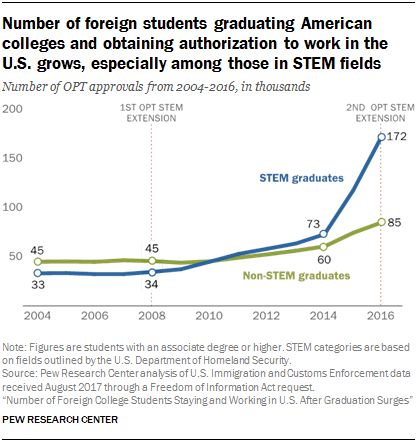 The OPT allows students on F-1 visa to work in the United States temporarily for 12 to 36 months in a field directly related to their area of study. The STEM students are permitted to extend their 12-month OPT for another two years.

Almost 53 per cent of the foreign graduates working through the OPT specialized in STEM fields. Since the first employment extension for STEM workers was introduced in 2008, there has been a massive growth (400 per cent) in the number of foreign STEM graduates participating in the OPT.